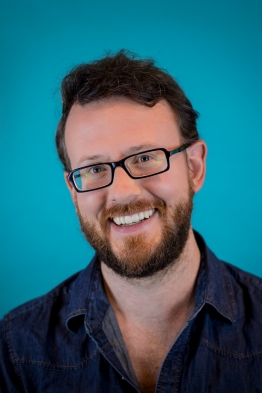 Joseph Richards is a comedian who blends the personal and the absurd. He can quickly go from talking about being bisexual to asking if chairs eat soup (he believes they do). He also enjoys making up material with the help of the audience. Joseph has been performing improv and stand-up comedy since 2004 in Washington, D.C., California, Colorado and Utah. He currently lives in the San Francisco Bay Area of California where he performs comedy and plays music with his band, Joey Cougar & The Starfish.

Cone Alone is his exploration of the thoughts and feelings of traffic cones.

He hails from the small town of Irwinton, GA. Growing up Southern Baptist provided Joseph an outlet for his naturally obsessive, zealous nature. Once he left the church behind, he focused his zeal on graduate school, music and comedy.

He is one half of the band Joey Cougar & The Starfish, known for touring select destinations in the United States in 2009.

He is proud to be one member of the award-winning film, Ripped Off, which won awards for best amateur film and best amateur acting at the 72 Hour Film Fest in Frederick, MD in 2011.

He was finalist in the first-ever 72 Hour Script Fest for his sci-fi short film script called “The Pariah of Aquimon.” Read about the film adaptation.